Kimono as Art: The Landscapes of Itchiku Kubota 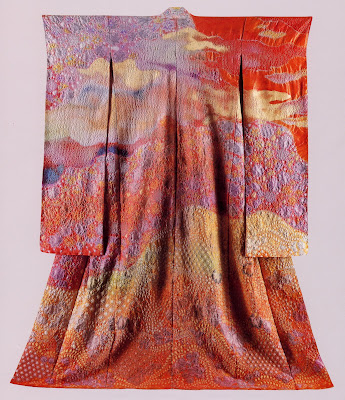 An exhibit showcasing 40 of the magnificent and towering (8-foot tall) art kimonos created by Itchiku Kubota is currently on display at the Canton Museum of Art in Canton, OH through April 26, 2009 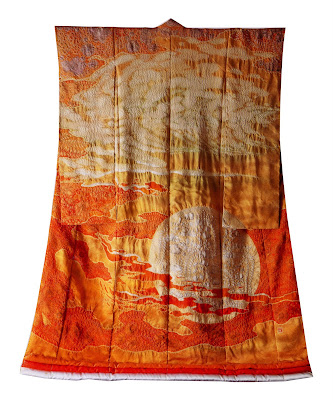 "Internationally acclaimed artist Itchiku Kubota used silk kimono as his canvas. Kubota had a lifelong fascination with the subtle changes of color and the quality of light achieved through skillful dyeing techniques combined with the reflective properties of silk. He often used nature as the inspiration for his work." 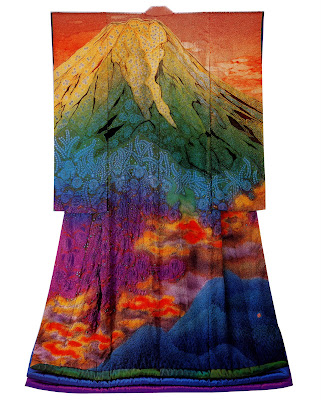 "Itchiku Kubota was born in Tokyo, Japan, in 1917. He learned the art of dyeing as an apprentice at age 14. At age 20 Kubota visited the Tokyo National Museum, where he found inspiration in a 350-year old textile silk remnant of the long lost art of tsujigahana (Tsu-jee-ga-ha-na). “In a sudden moment” he said, “I encountered a source of boundless creativity which revealed to me my calling.” World War II intervened and Kubota was taken prisoner and put in a Siberian prisoner-of-war camp. Upon his release in 1951, he devoted himself to fi"nding the secret behind this extraordinary technique. It wasn’t until 1977, when he was 60 years old, that he finally succeeded in his quest and developed his own method, which he called Itchiku Tsujigahana. Kubota used a complex process of layering dyes, inks and embroidery, on eight-foot-tall kimono. A single kimono could take as much as one year to complete." 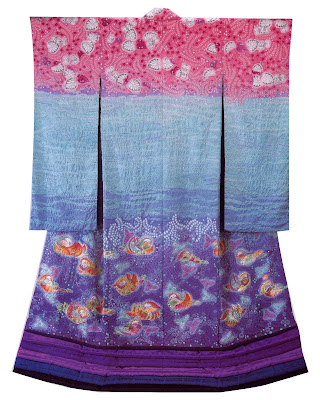 The process to create a kimono involves the use of many steps and and a variety of techniques to produce the desired colors and patterns. From foundation to finishing, the elements involved include:
http://kimonoexhibit.com/creation.htm 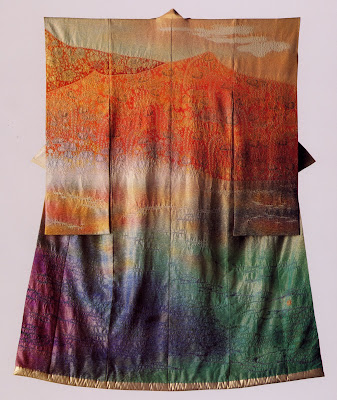 You can view a 3-minute video of the exhibit which includes clips of the artist at work:
http://kimonoexhibit.com/ 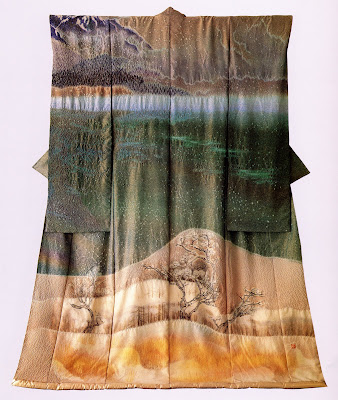 Email ThisBlogThis!Share to TwitterShare to FacebookShare to Pinterest
Labels: Symposium/Exhibit

Websites frequently change the URLs that provide access to the information or disappear completely without any prior notice. Therefore, make sure you print out and/or save to your hard drive any information that you particularly want to retain for future reference (as a PDF, or copy and paste it into a word processing file) .

To Be Notified About New Posts: